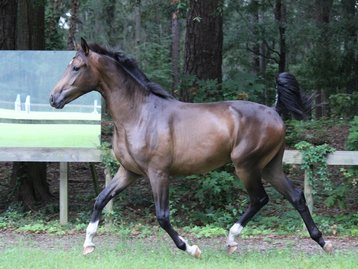 I have known Jill for over ten years and have seen time and time again the quality horses her experience and knowledge have produced.

As a competitive FEI dressage rider and trainer, I look for a horse with three quality gaits, good conformation, and rideability which is exactly what Jill is breeding. Four years ago, I purchased Fortissimo SQF from Jill as a weanling and he has met and far surpassed my expectations.

As a four year old, I am finding him to have three great gaits, wonderful trainability, and is beautiful to boot! I couldn't ask for a better partner and have been so happy with how he's turned out that I decided to buy his half brother this year, Quarternote SQF! 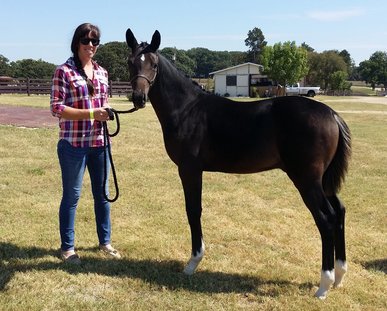 Quarternote SQF with Lesley
In addition to Jill's breeding knowledge, she has a huge asset in Rachel, her barn manager.  Her knowledge and attention to detail shines through in her care for the mares and foals. When I brought Forte home, I found him to be a happy, brave, and well adjusted two year old. This made him a breeze to start under saddle and I owe this to Rachel's great work with him in his formative years. There is no one I would trust more with the care of my horse.

I look forward to the continued relationship I have with Jill and Rachel and am excited to see what the future brings as I start showing Forte this year! 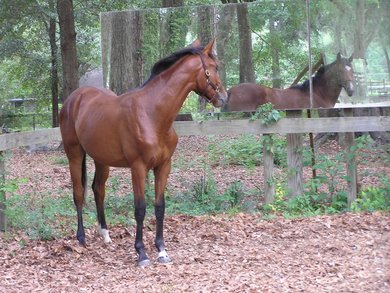 
I’m back from my long weekend with my parents and Ling.  I was so busy that I didn’t get a chance to take as many pictures as I’d hoped, but I attached a couple.  At least it’ll show you where she’s hanging out.

By Sunday Ling seemed to be settling in a bit better and was (finally) very interested in carrots.  She still is not eating her grain well and picks at her hay all day without finishing it.  We are feeding her both types of hay- your coastal and our orchard. Yesterday, she was doing better still.  She is so super sweet and she’s fun to brush and bathe, etc.  She does love to be loved.  And she does want all the attention that’s for sure!  Lucky for Ling, her pony-neighbor is a little shy with new people, so Ling gets to be the star.

I was so happy that she’s easy to work with.  My Mom has a little trouble establishing her own space with Ling (who can be a bit pushy), but this is more about my mom then Ling.  I found her to listen quite well.  She was following me around everywhere she could by Monday- without being pushy at all.

Oh, and she is SO captivating to watch in person!  Wow!  Video does not due her justice.  You can tell by the pictures that she has lost a lot of weight.  Hopefully she’ll keep settling in and put the weight back on.  It’s a big change for such a thinker.  You can tell Ling thinks a lot- I hear that’s true of most Wolkenstein II types. 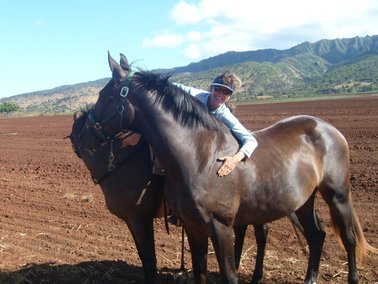 Dear Jill, Rachel and all of Balanchine's friends,

Balanchine has landed.  He is absolutely gorgeous!!  We were home by 8am, and spent the entire day eating and resting in his new stall/paddock, with various family members and a couple of close friends stopping by. Balanchine would eat, drink go for a walk and stand with one leg rested and nap awhile then start the whole process again. During his third nap (or so) I finally decided to lay down and rest.  Well, I realized I had fallen asleep when he was finished napping and came over and gave me a gentle nudge to wake me. He is super cool!!!  He is definitely interested in the cattle of the neighbors that have busted into our pasture.

Unfortunately I have one appointment this am, but then have another almost full day to hang out with him. Today we will introduce him into his nice big pasture, and get some more video to send.  We did get some good photos yesterday, but camera decided to malfunction so won't be able to enclose, but I will send soon.

Thank you Jill for the horse of my dreams!!

He has been such a super star since he arrived. I can tell he has been raised with nothing but love and respect. I have found the horse of my dreams!

I would love to keep in touch with you, so I'm going to include all of my contact info. You are always welcome to visit him when you are in Colorado!

All my best to you ~ my heart is full! 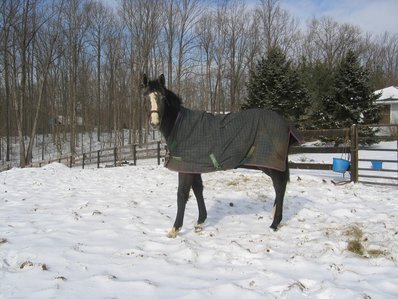 Yes I still have her and still love her. I backed her in November for 30 days and then she was off all winter. I think you know that much. Then just last week I started her back up...... including pulling her mane, YIKES..... that definitely involved a twitch! Other than that she has been really good. I lunged under tack a few times and have been on twice now. By the second time she was walk, trot, and cantering quietly, basically right where she left off. She did not offer to be bad at all. She sticks a solid 16.3 now.

I ship in to a trainer with my other horses, and she is excited to meet Soiree. I will tenatively take her over there and hack her around sometime in the next few weeks. I plan to ride her all summer keeping the 3 yr old under saddle at the International Hunter Futurity as a goal. That is in September and just happens to conveniently be held in my town. There will be a lot of photographers there and she will be braided and everything...Here is the website for that: http://www.inthf.org.

I will let you know if anything exciting happens between now and then or if I can find someone to take some under saddle pictures. Good luck with the website and all the fabulous new babies! 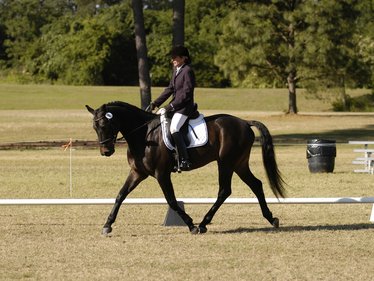 Detente did very well last year with Jean DeVenny and came home to me in July, Since then I have been having a great time with him and also trying to concentrate on my older horse and get him confirmed at 4th/PSG. Had no plans for showing Detente again until perhaps the fall.

He has grown some and filled out and doesn't look like an adolescent anymore. He continues to be the perfect amateur horse. Loves to be rubbed, FED and just generally likes to be with his people. He continues to be very trainable and willing. Detente has turned out to be exactly what I had hoped when I looked at him as a 2 year old.

Thanks for keeping in touch. 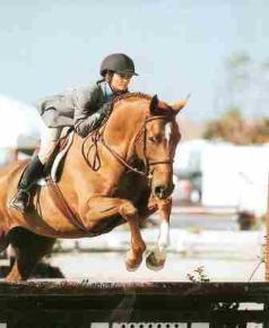 Mr. Gunnar is doing wonderful, he has been doing the pre-greens with Viktoria or at least we have been trying to :).  The past 3 shows Gunnar has come along but has had to be scratched fir some odd reason or another (attacked by fire ants, allergic to new linament, etc) - it has become a joke in the show office that he just
wants to come to the shows to socialize.  The next show is in 2 weeks & Gunnar has assured me that his 3 crazy things are done & that he is very ready to get back into the ring.

He has grown a bit more in both directions & is still quite the clown.  Just last week he thought it would be really funny to leap in a huge puddle splashing me while i was taking his halter off in a paddock,  So of course he got loose & then spent the next 1/2 hour running & bucking right around me (170 acres & he stayed within 20' of me the entire time just so he could mud me) his romp finally ended when he jumped into a paddock with a cute mare that he wanted to scratch his back.

He's been jumping around the 3'9-4' every now & again - with beautiful style & plenty of clearance.  He just loves it, u can see his happy little ears & he almost smiles when he sees he gets to do the larger fences.  I will try & get some really cute larger fence photos of him & I will send u a copy of his pre-green photo from circuit (he looks ultra cute).

So as u can see Gunnar is doing great :) 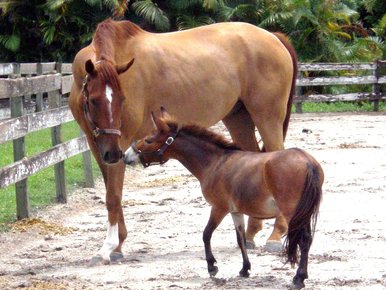 Thought you'd love this story. My Blue's pasture buddy had to be put down (at 29 - they should all be so lucky to live that long) and I had to bring him back to my barn till I found him a new buddy. Well on Friday I got him a 1.5yr old mini mule (see photo) - from the second we unloaded him Gunnar has been in awe of him. So yesturday I had Blue & Lord Humphrey Humperdink (thats his name) out & I thought what the heck let me let Gunnar go play with them - well Gunnar decided that Humphrey is his baby & would not let Blue or anyone else near him. He stood over him the entire time with his neck all cresty & whenever people would stop to try & look - Gunnar would prance around like an upper level dressage horse all proud of his baby. Everyone kept saying that I should let Gunnar have him & go get Blue another mini. 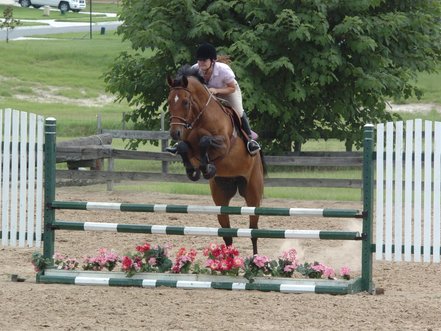 I wanted to write you an official update on EM Wunder for your Alumni page, after this weekend double 1st places in the 3' jumpers! I have had her for a year and half now and she truly is Wunderful. Sometimes no matter how fortunate we are we can take things for granted, and every once in a while I realize all over again how lucky I am to have a horse like Wunder. Thanks to you of course. She was quirky at first, but classy. When I got her, her nose was in the air and she HATED flat work. I switched her to a hackamore, and she dipped her head down into the bridle, rather than sticking her nose in the air when I presented her with a bit. Well, we have moved on to tolerate the bit but if you want to see a creature in her element just watch her jump. No matter how she buts heads with the other mares in the pasture and resists her flat work, I myself was surprised when I saw the 1st pictures of her jumping. She looked like a different horse, ears forward with excitement. She is a very intelligent mare, and is always paying attention to what is going on around her, but when she goes in the ring she locks in on the jumps and she is in her element. Sometimes I say the more jumps we can pack in the ring, the more I think she would pay attention. I love to see her son Gunnar is progressing so well (in my hometown) and I see that he is quite like his mom! I can't wait to breed her, but I don't want to give up riding her until I have to (she's 15 now). So maybe you have my future jumper in the works? Your horses are all of the highest class, and you are so honest and passionate about them. Wunder deserves the comment's she gets at the shows: from "look at those knees" to "Now that's a 'real' horse." I will continue to forward more updates and pictures of EM Wunder. I will try to keep my webpage updated with info and any future babies of course!