Capisce's story is a summary of the dizzying highs and the darkest lows that life with horses brings to all of us who love them so well. 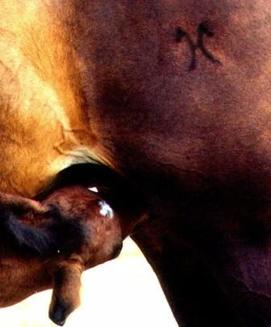 Capisce was highlighted as a stallion prospect by Gerd Zuther at his AHS weanling inspection ~ an incredible thrill for a small breeding farm such as ours!  As he grew, Suzanne and Scott Hassler visited our farm twice and were equally impressed with our wonderful Contucci son.  Anne Gribbons visited once when he was a 2 year old.  After a SILENT and LONG (for me) 3 or 4 minutes assessing him, she turned to me and declared: "No question!  Take him for stallion licensing!"

He was so cooperative and beautiful as he grew.  Always a perfect gentleman, and he simply dripped elegance in every movement. But every night as he was turned out, he turned to trumpet into the mare's pasture:  "I'M GOING OUT TO MY KINGDOM NOW!!"  The mares, of course, seldom noticed. 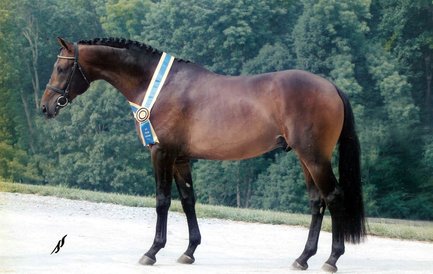 On 7/27/02 our breeding program received the ULTIMATE compliment: our 3 year old stallion, Capisce, was licensed by the American Hanoverian Society as a breeding stallion.

We were completely over the moon!

Inspections were held at Hilltop farm in Maryland. Licensing was a grueling affair (mostly for me) ~  involving a full day evaluating the stallion's conformation, purity of gaits, temperament, masculinity and presence, and free jumping ability. The Hanoverian system requires four judges (two American judges and two from the German Hanoverian Verband) all agree on a prospect's excellence if he is to pass.

At the end of the day, the judges licensed only ONE of the seven originally registered (several of those imported from Germany).

The lone licensee: our "home-bred" Capisce. 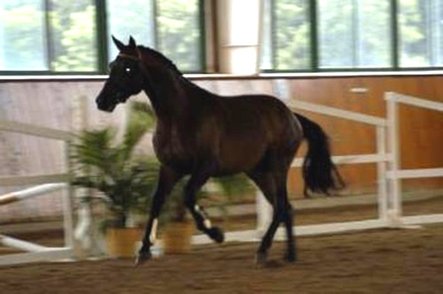 With the expert organization of the Hilltop Farm professionals, Capisce shipped immediately to the 100 day test at Paxton Farm in Ohio.  He passed all vet checks, settled in like a champ, and was starting baby cross country canters by the end of the first week.

Early that weekend, he suddenly began to run a fever.  100 day test director Helmut Schrant immediately contacted me and the farm veterinarian.  Within a few hours, the fever had continued to rise, and Capisce was having trouble standing. Thoroughly alarmed, the Paxton Farm folks arranged shipping to Rood and Riddle, one of the finest equine hospitals in the country.

Capisce courageously fought high fever, laminitis, and excruciating pain for 45 days. For that entire time, his spirits were good and he continued to be the perfect gentleman. However, when his spirits failed, he lost interest in life, and even our wonderful and trusted farm vet offered no hope, I knew it was time for him to go.